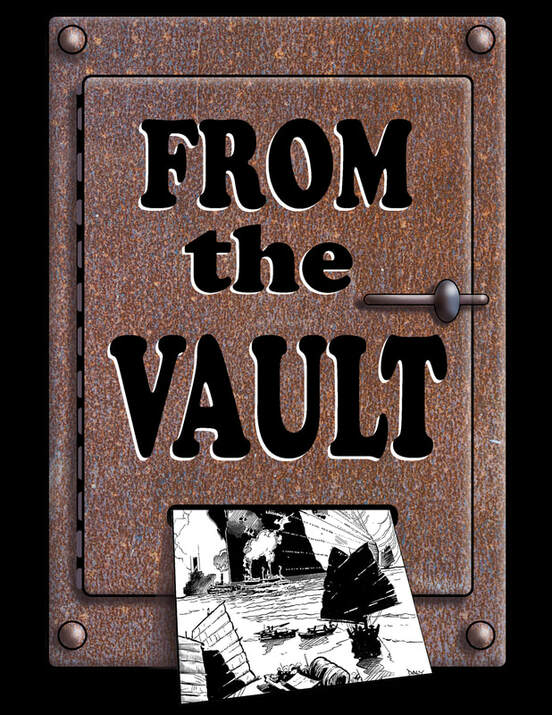 Welcome to our online museum, storage closet and sometime dustbin, wherein you will discover all sorts of artwork, oddments and related sundry memorabilia from days gone by...

Here are the cover and an interior page from Paul Daly's Family McFear Sketchbook, Paul's concepts and illustrations on a future project.
​You can pick up a copy in our ebay store (see our links). 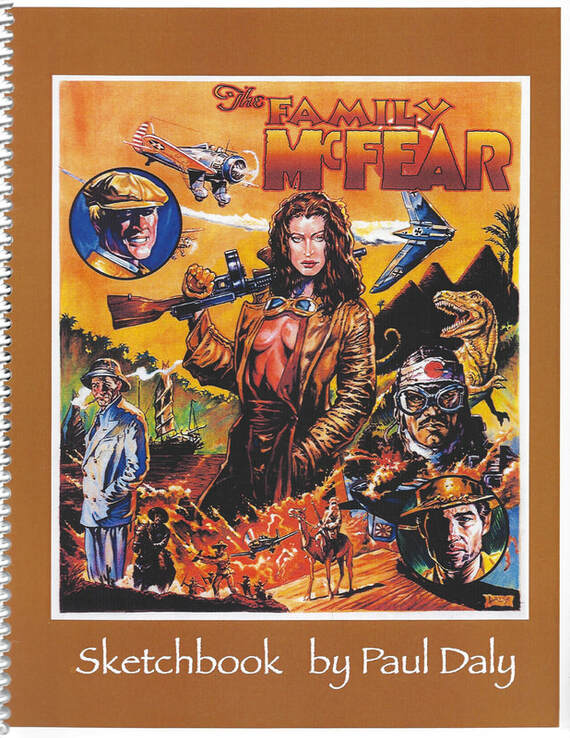 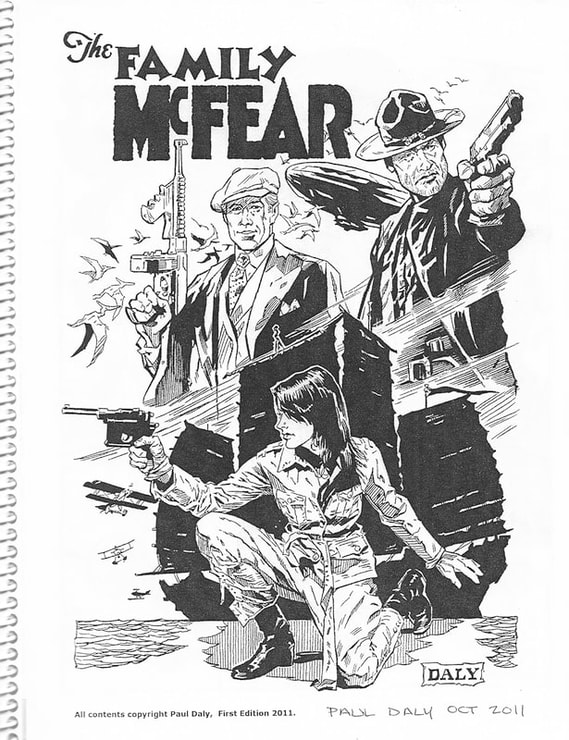 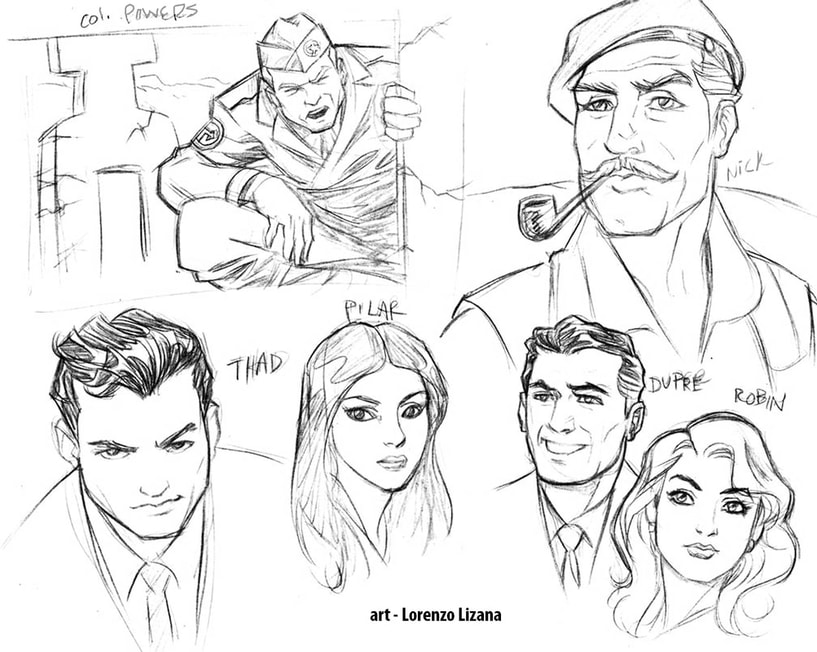 Below are a few pieces by Bill Lux. He has the next couple Terranauts' Homepage illustrations ready, but we wanted to showcase some of his other work. While Bill does a wide variety of art, his fans favor what they think he does best. And just when you thought Adam Hughes and Frank Cho had the market cornered!
​Pictured are DC Comics' Black Canary & Wonder Woman (2008) and covers for
​AC Comics' Femforce no. 129 (2004) and a Femforce Pin-up issue.
Here are two  oil paintings by Eric James, who maintains our website. He painted these for the St. Louis Science Center's First Friday show titled Bourne, Bond & Beyond. The left one pays tribute to James Bond; the right one salutes Jason Bourne. You can find more of  Eric's work on his website,
​www.amomentssunlight.com.
When creators create something exciting (to themselves and, hopefully, to others), rarely do they just stop at a sketch or story idea or concept. They want to go a step further, and make the project really come to life.

We've been creating Terranauts adventures since the mid-80s (see Fantasy General Comics), so for years we’ve been thinking about various ways to experiment with media. At one point, we turned our attention to lobby cards. Since Paul Daly, Rick Burchett and a few other contributors are big into cinema, we considered old time lobby cards as natural extensions of the comic strips themselves. So, we created our very own lobby cards, just as if Hollywood had come a calling!

We set the scenes in the 50s (just like our comic strip Terranaut team), and found great locations and called upon the models on which we based our comic characters to double as actors for the lobby cards.

The lobby card below portrays Cuda's chief henchman, Mason (Walt Jaschek) wrestling with Robin (Erin Woods) over a pistol in an empty railroad tank car. On the right side is Capt. Cuda (Pete Milanowski) taking aim.

We created 8 lobby cards total (4 of "The Mechanics of Death" and 4 on "Invasion of the Synthetic Men"), and had a lot of fun in the process.

We hope you get a kick out of them, too. We'll be dropping more of them into the Vault,  in the coming weeks, so keep checking back! 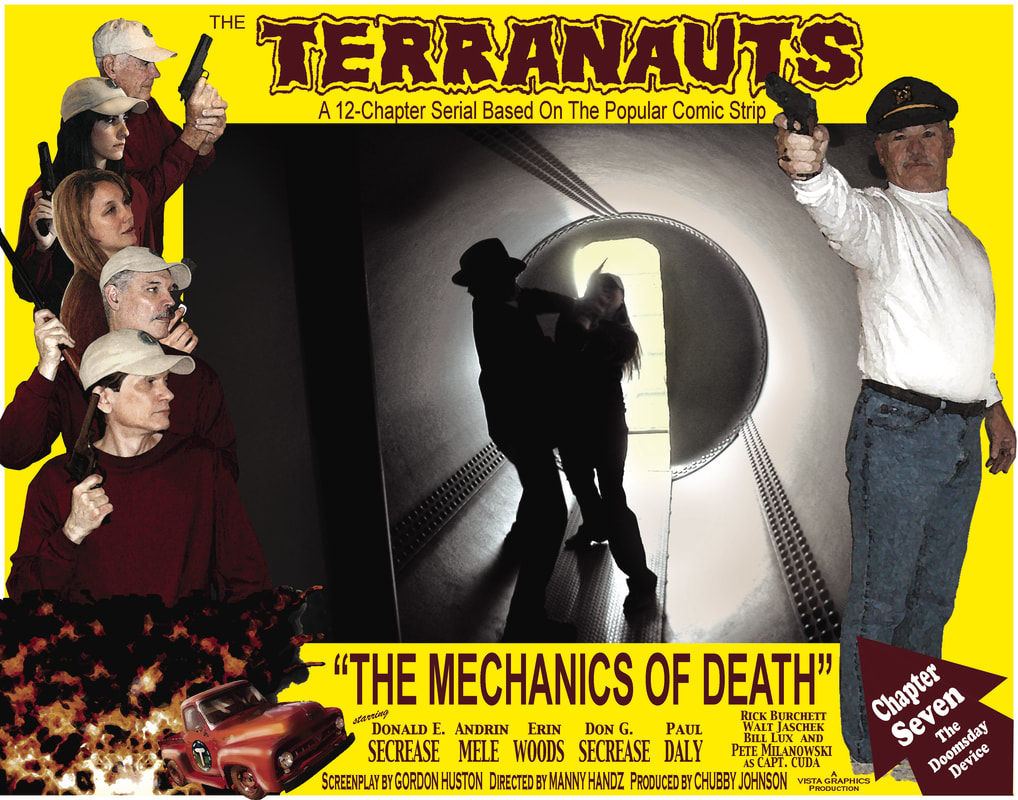 Below is the next Terranauts' lobby card. The Cloak (Ron Lizorty) squares off against Thad (Paul Daly), Pilar (Andrin Mele), and DuPre (Donald E. Secrease. The storyline has the Terranauts trying to stop the Cloak from creating an army of synthetic men (all resembling Craig Skaggs). 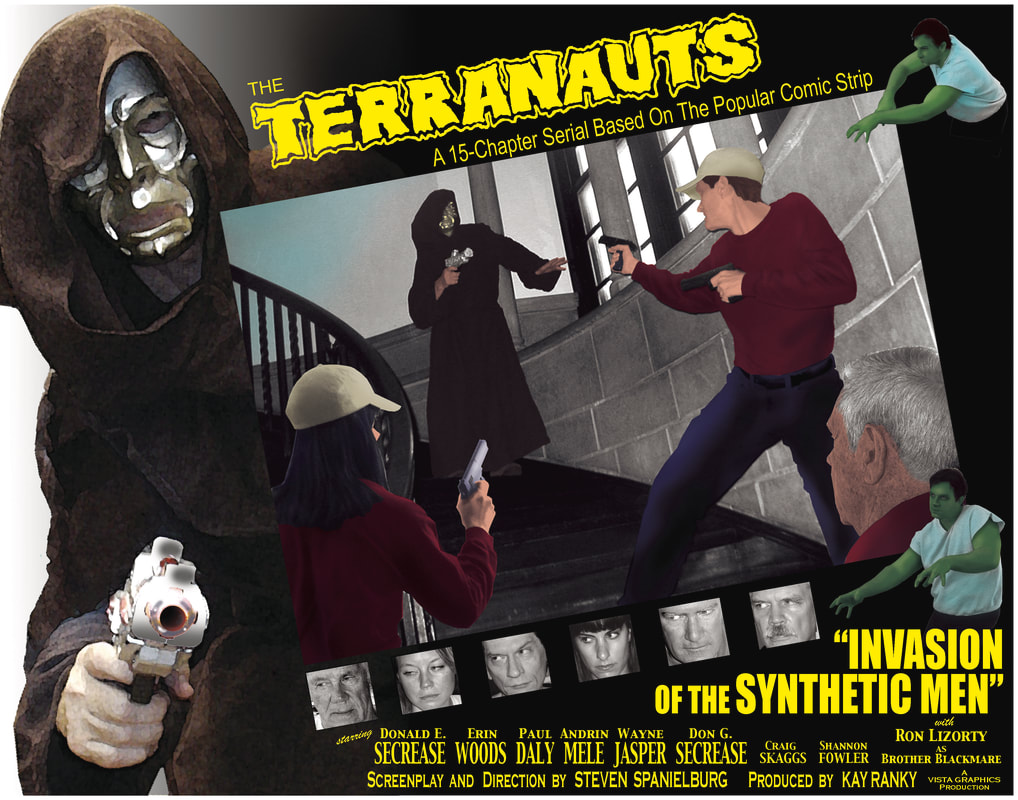 Sons of the Saddle:  The Abbreviated Backstory

This serial chapter of Sons of the Saddle’s “The Invisible Rayders” (Chapter 4 “Doorway to Doom”) was made by a group of B-movie/serial fans for fun, to be shared by friends and family. It was the summer of ’95, and a few of us were discussing fan-made, straight-to-video movies, comparing good to bad, FX, etc. Produced by Skeleton Creek Prod., W.A.V.E. Prod., and Bill Black’s Nightveil Media (its contemporary name), these films were viewed, discussed, and admired for their ingenuity and enthusiastic presentations.

Our ragtag team of B-movie aficionados decided to gather friends and family and create our own movie-making inadequacy. We picked our daily gag comic strips, Sons of the Saddle, wrote a 12-chapter serialized story, picked a random chapter (Chapter 4), scripted it, and started rounding up the usual suspects and costuming (and horses and tack).

All fell into place once we scouted our locations. Our major battles filming that summer:  a Missouri heatwave, reliable video cameras and, finally, appropriate music. Since this was made for private amusement (or condemnation) and not for sale, we picked background music from a few Republic Studio serials & B-westerns.

Below is the wraparound DVD cover (painted by Bill Lux) and a couple of lobby cards.    Check out the Sons of the Saddle serial on YouTube....
​
Enjoy! 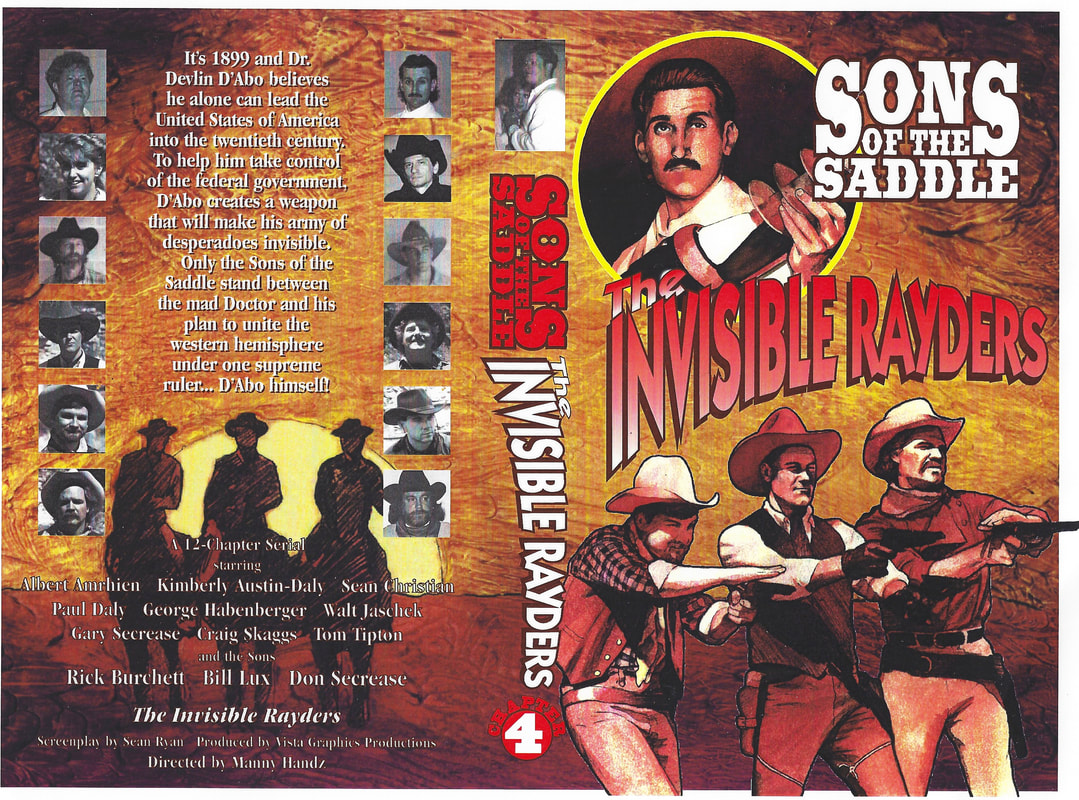 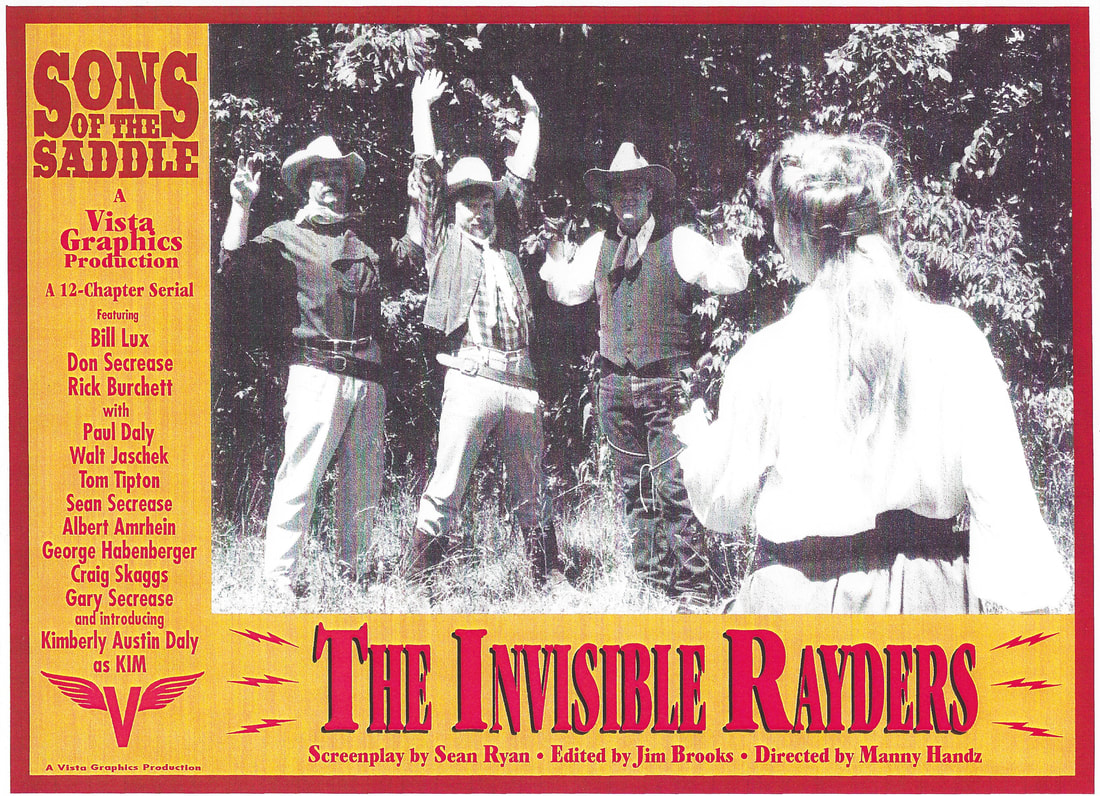 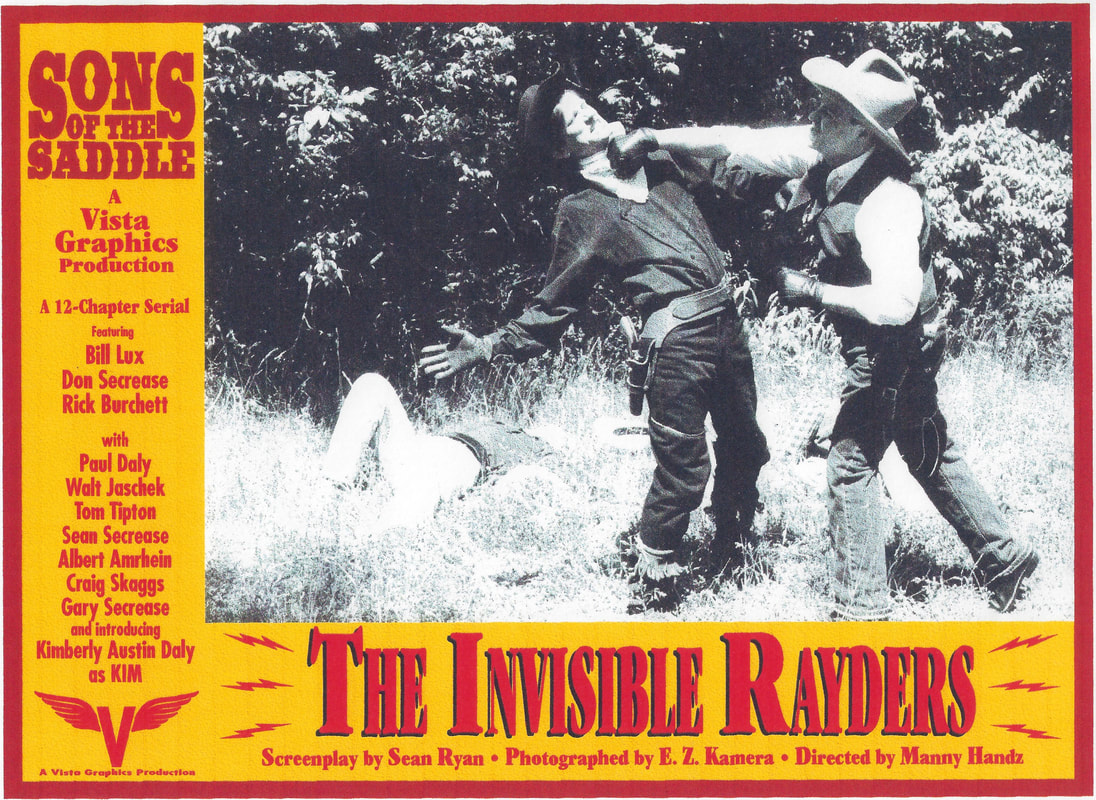 VISTA GRAPHICS: A LOOK BACK

Below are covers to a series of digest fanzines created by Vista Graphics (consisting of Paul Daly, Rick Burchett and Don Secrease) almost 40 years ago. These followed four issues of the magazine-sized Swashbucklers stripzine also produced by Vista Graphics which had followed a few issues of Night Voyages, which were not produced by Vista Graphics but featured the Daly-Burchett-Secrease work which would lead, with the help of Gerald Brown and the Night Voyages team, to the creation of Vista Graphics and said publications…. Whew! Hope that wasn’t confusing.
After pouring so much work into Swashbucklers (a series we will eventually post and talk about at a later date) and, being fans of comic-related fanzines for years, we experimented with a smaller, more manageable size of fanzine (or, most times, stripzine). They were easier to manage, produce, and print and, most importantly, were much less expensive for both the presenters and the buyers. We were never in this to ‘make a buck’ (any fan-based project should expect that), so we priced these as inexpensively as possible. All with black and white interiors with the covers printed on color paper. And we were pleasantly surprised they sold as well as they did (considering they had a low print run originally).

Our first issue (Vista Graphics no. 1) consisted of Paul Daly’s complete run of his college newspaper strip, Christopher Kyle, combination science-fiction, fantasy, space opera. The one drawback to this issue was the reduction of the strips. At times, the copy is so small you need a magnifying glass to follow the dialogue. (You’ll note an ‘NMPS’ at the bottom of some of these issues. We’ll explain in full when we talk about Swashbucklers at another time.)
The Complete Justice League of America Reader 100-200 (Vista Graphics no. 2) was made for the JLA fans. One of the many fanzines we collected throughout the years was  Mark Gruenwald's Justice League Reader 1 -100. It was something every youngster who grew up with the JLA (from the B&B issues on) was finally able to see and share. It was an excitement we hoped to recreate with this issue. Lists included plot synopses, credits, alien worlds, guest appearances, etc.  It must have worked; it was the only issue that sold out!
Spicy Headlite Comics (Vista Graphics no. 3) was, okay, what you expected. For some reason, fanboys really picked up on this issue, not sure why. While not R rated, it was more gratuitous than your average fanzine but not by much. While we could apologize all we want for it now, it was a product of its time. Besides, where else are you going to find Rick Burchett’s dive into exploitation with his wonderful Blue Velvet character… that alone is worth the price of a… dollar?!
Adventure Road no. 1 hosted a variety of stories. One of these, written and penciled by Don Secrease and inked by F. Newton ’Butch’ Burcham, was a story originally intended for Charlton Bullseye. ‘The Resurrection of Irv, the Nerve’ was the return of Charlton’s Fightin’ 5. In addition to a few other strips, the center spread featured an odd ditty called ‘Frog Wars’ by Vincent Janson.
Move forward ten years. Vista Graphics crawls out of its grave to produce Sons of the Saddle no. 1. While the story inside is a fun cartoon romp through the old west, the characters are imaginary extensions of Rick Burchett, Bill Lux and Don Secrease, all of whom worked together at an art studio in St. Louis. Throwing out ideas for a daily gag strip lead to the Sons of the Saddle. The Sons are a mashup of Tumbleweeds, Rick O’Shay and Lucky Luke (and a host of other fun cowboy things).
‘The Invisible Rayders’, A Serial Review, is just that. When Lux, Burchett, Daly and friends got together and actually filmed a chapter of a make-believe serial, we decided a companion booklet had to be part of the Sons’ package. When it was finished (25 years ago!), a buyer got the Chapter 4 Video, Serial Review booklet, Sons of the Saddle baseball cap, an autographed photo of the Sons and copies of the lobby cards which you find just above this article in the Vault.
THE FURTHER ADVENTURES OF...

Back in the mid 1960s, on television and in the movies, westerns were slowly being replaced by spies and cops and private eyes and almost anything contemporary and splashy (okay, maybe not too splashy).

Comic books were mimicking the trend, only instead of plainclothes, sports car-driving heroes, the bulk of do-gooders wore tight costumes and capes. Cowboys were being herded to the far corral to make room for super-abled super-heroes: “Pardon me, ma’am, while I mount up on my Bat-fusioned, Bat-turbined, Bat-glazed, Bat-wheeled, Bat-Hoss and blaze off into the sunset.”

Some cowboys faded away, others died quickly. Some lingered, some went into hiding, awaiting a ‘new look’… and some just happened to be in the right place at the wrong time.

Idaho, lasting eight issues over nearly two years, is one title I’m not sure even Dell Comics was aware they published at the time. The stories, slightly bloated, to span 24 plus pages with art by Jenney and Colletta didn’t help much. That is, with the exception of issue eight, which may have been handed over to another editor because the look/feel of the book vastly improved. While we no longer had a cool, nondescript cover painting to tell what was not happening in the book, we did have Dick Giordano to improve the interior art. Was it always planned to last just so many issues? Did it die from newsstand neglect? Can we reach Mark Evanier in time to fill in the secret gaps?

Well, after 55 years, two funny book guys decided it was time to ‘check in on our saddlepals’ and see what they were up to.

Idaho no. 9 finds Idaho and Frazzle riding through a little Kansas town on their way to become outriders for a Colorado ranch. You know there’s bound to be trouble somewhere, right?

Stories and art are by Blackhawk, Batman, Black Hood artist Rick Burchett and Black Diamond, Black Owl artist Don Secrease (I know I could have listed She-Hulk, Justice League, Terranauts, and Mall Cop in their comic credits but I was having too much fun in the ‘B’s).

And the covers… ah, yes, the covers. Like I said above, the covers (with the exception of #8) had nothing to do with the interiors (as lovely as they were). So … it was decided that the new issue of Idaho should follow the trend of a painted cover but, this time, the image would vaguely relate to something happening in the story.

Nowadays, a lot of publishers are giving readers multiple choices of covers for a particular comic. Chris Mills, at Atomic Pulp, specializes in this, and they all look great! So, we rounded up some top, local talent and they came through with flying colors:

Craig Skaggs, an artist who’s painting for both Disney and Lucasfilms.
Eric James, a longtime radio host and videographer, now turned dedicated painter.
Bill Lux, Femforce artist and co-designer of the TMNT cereal box.
So, if all this tempts you to order Idaho no. 9 (and we hope it does!), hop on by Indyplanet.com or find it on eBay…. and enjoy the further adventures of Idaho and his irascible sidekick, Frazzle!